Steve Mellor is a 40-year-old coal miner who was diagnosed with Black Lung disease two years ago. Despite working in underground coal mines for 13 years, Steve had never heard of the disease.

As a contractor, Steve was simply ‘let go’ after his diagnosis. The mining companies did not provide any support; his past employers wiped their hands. He has had to seek out and fund all his own medical treatment.

Because he can’t risk being further exposed to dust, Steve’s career in mining is over. He hasn’t worked since his diagnosis.

The Queensland Government has stepped up to provide a much needed service. The introduction of a mobile screening ban will enable current and retired mineworkers to get screened closer to home. See the report on WIN Rockhampton (6 June 2019). Queensland District Check Inspector Jason Hill is interviewed. 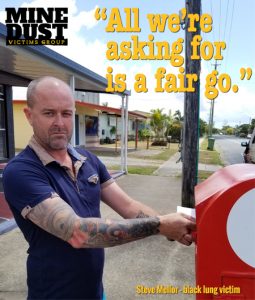 Former mineworkers and dust disease victims Steve Mellor, Keith Stoddart and Tim Trewin signed a letter to coal company chief executives on behalf of the Mine Dust Victims Group calling for companies to pay a levy  on coal production to assist workers afflicted by the disease.

Only two of the companies – Jellinbah Group and Stanmore Coal – bothered to reply directly – and that was to say NO to the levy.  They rejected the merits of the proposal without even offering to discuss it with the Victims Group. The rest of the companies were similarly dismissive – but got the Queensland Resources Council (QRC) to do the talking for them.

Letter to Queensland Members of Parliament

The next step by the Victims Group has been to write to all Queensland MPs. Their letter calls for support from Members of Parliament following the rejection by coal operators.

They say, “We are all constituents of yours in Queensland. As our democratically elected political representatives we ask you now to show your support for our proposal. Will you stand with Dust Disease Victims and our families in your communities for a Fair Go? ” Download the letter 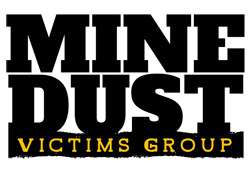 The Mine Dust Victims Group has been formed to represent the interests of those who have been diagnosed with one of the mine dust diseases.

Dust disease victims and their families have been betrayed by a trifecta of failure:

The terrible price being paid for this failure includes:

Something has to be done to meet the out of pocket expenses for victims who require tests and treatment. The Mine Dust Disease Victims Group will be hosting forums next week to enable coal industry workers, their families and retirees to be better informed about black lung and its impact on victims, and also how to navigate the assessment process  and the risks associated with seeking compensation.

All the forums start at 6.30pm It is time for the Mining Companies to step up to the plate and assist stricken Victims through a small levy.
Victims are left largely to fend for themselves as they embark on costly exercises involved in discovering the extent and treatment required to fight the effects of Dust Diseases. They need, and deserve, an Assistance Fund.

The Victims Group is proposing a modest one cent, per tonne, per week levy on coal produced in Queensland to initially establish a Queensland-wide coal industry fund to assist those coal workers who are already suffering from mine dust diseases and the increasing number of other victims who are coming through. Black lung victims travelled all the way from Central Queensland to BHP’s head office in Melbourne, to try and talk to senior executives about their plight and the need for an industry fund.
BHP’s response? Sorry guys, too busy. Victims of coal mine dust diseases and their supporters rallied outside BHP’S Brisbane office on Friday.

The group is campaigning for the establishment of a victims support fund to help people with mine dust diseases and their families cope.

The Mine Dust Victims Group has written to the CEO of BHP, Andrew Mackenzie, seeking the company’s support and are angry that they have not received a response.

If you are a Mine Dust Disease Victim and you want to seek more information or assistance, fill in the form.

Are you a mine dust disease victim?

Do you have a family member who is a mine dust disease victim?